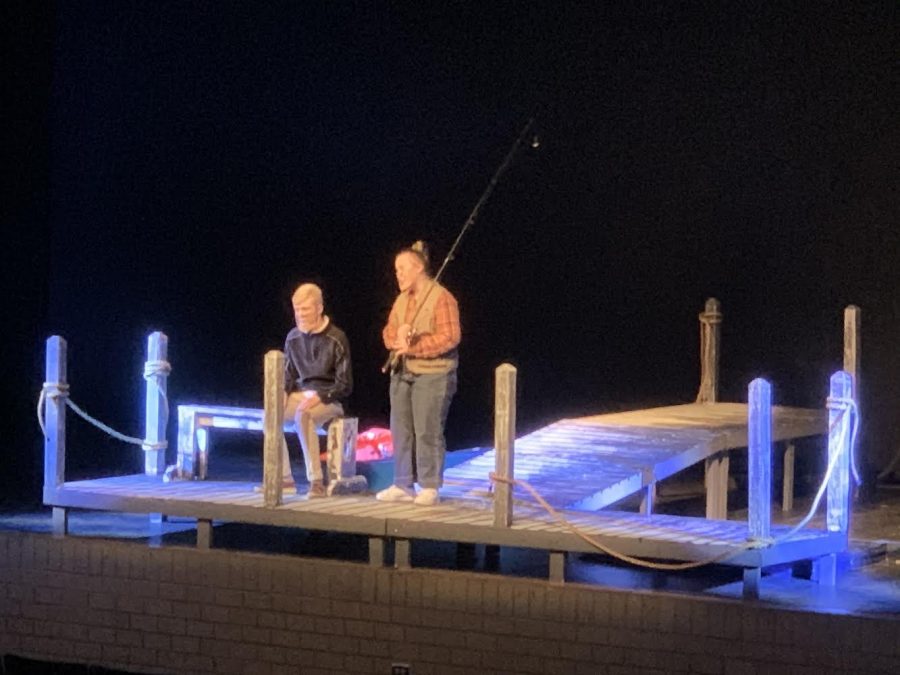 SCENE TWO: Freshman Aidan Mountford (as Johnathan) and Junior Ali Clark (as Beth) acting in their scene. Ali is on the dock sitting with her father who has Alzheimer. And she's got a huge monologue because the dad doesn't really communicate anymore. She's begging and pleading with him to remember what life was like.

Tickets are available at seat-yourself website off the GHAPS web page for $5. It’s in the bottom lower-left corner of the icon. Click on seat-yourself, and that takes you to the link where you get a ticket, which is also a link to the show. It will be streamed at 7 p.m.

“We decided to delay our musical until spring because of COVID,” Director Rita McLary said. “So I chose a small fall play called ‘Our Place,’ it’s a series of vignettes that deal with everyone being at this one place. It’s a dock at a deserted lake.”

With a small cast, they’ve been working extra hard to make this play possible. Due to COVID-19, the cast members had to rehearse scenes separately with only a few students at a time, so that way they could wear masks and make social distancing possible. With no audience, this will make performing harder on the days of the show because actors feed off an audience.

“They just love performing so much, and I’m proud of them,” McLary said. “I want to just emphasize how hard it is that they don’t get an audience.”

Not only have the cast members put in work, but stage manager and student director Jordan Smaka has also put a lot of effort and commitment into the play.

“As my assistant, Jordan takes care of all the details such as, running the boombox, taking attendance, keeping track of schedules, and 101 things that I don’t have time to do,” McLary said.

There are five short scenes with about two and five actors and actresses in each scene. The approximate time of the show is 50 minutes long.

Even though the play is shorter and will be different than normal, the cast is excited and ready to show their parents and friends their hard work and talent.

“It’s important for people to see this production not because it’s small, but it represents a quality of acting that you don’t very often see at a high school,” McLary said. “I’m hoping people would go to seat-yourself and get the link.”