Worst ending to “The end of the F***ing world” 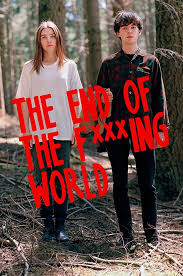 As it is said all good things must come to an end and the sequel to anything usually sucks. Maybe that’s not exactly how it is said but the message still holds truth. The show End of the F***ing world was no exception. To say that season two was a disappointment is an understatement.

The storyline was weak. If the storyline was a weightlifter it would only be able to lift the bar. It lacked the spontaneous adventure that the first season is known for. There was no destination or goal making it hard for viewers to feel like anything is actually going on in the show. I want to scoop my eyeballs out of their sockets so that they will never have to see anything this terrible ever again.

The only purpose that the second season served was to tell the fans that James survived from season one. That was the only thing that happened  that had significance. But you find out that James survived in the first episode so the rest of the season had no purpose.

The little plot that is there was so stupid. There were so many chances that the girl had to try to kill James and Allyssa and she didn’t take any of them.So the ending was not a surprise when she doesn’t even attempt to murder them which was dull. Also in like the last two episodes the writers must have just came up with a spark of misguided inspiration in the middle of shooting the season. Because out of nowhere Allyssa has PTSD that just appear in the last couple episodes..

Lastly the love stories in this season are so messed up. Nothing makes me feel safer about going to college than glamorizing having sex with your college professors. Because there is no love story that the season could have focused on and no having sex with your college professor is not a love story it is just disturbing. But they had a perfectly good love story ready to go between Allyssa and James and they hardly did anything with it and it pisses me off.

There is no point to watching season two and I would suggest no to waste your time watching garbage. James lives and that’s all you need to know.