Students struggle with social anxiety, a disorder that causes stress and apprehension at the thought of social interaction 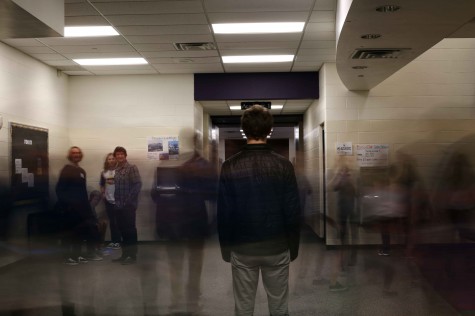 The evening started out rough. Baumgarner had been in choir for years and sang in countless concerts, but rehearsal the night of the spring concert had taken its toll. The obnoxious chatter of her classmates overwhelmed her more than usual and as she stepped onto the stage, she felt all eyes on her.
She panicked.

“Even though I knew it wasn’t just on me,” Baumgarner said, “I knew that there were people in the audience watching.”

“It was to the point where I started shaking and then I had to leave instantly,” Baumgarner said. “I lost my breath and then I started to pass out. I was almost ported in an ambulance.”

She has since been diagnosed with Social Anxiety Disorder, a psychological disorder that causes extreme and illogical fear of social situations.

According to the Social Anxiety Institute, social anxiety is the third largest psychological problem in the US. However, there are many misconceptions about what qualifies as social anxiety.

Sophomore Kyra Peterson believes she may have the disorder. She’s often fretted over being judged and embarrassing herself.

“What makes me think I have it is how nervous I get in any social situation that forces me to put myself out there,” Peterson said. “Like a presentation for a class, I’ll get myself all worked up over it even though it’s something so simple.”

Bethany Cramer, a Limited Licensed Professional Counselor in private practice who specializes in anxiety explains that social anxiety goes beyond the limits of shyness during the occasional presentation or meeting new people.

“A typical teen with social anxiety would sit as close to the back of the classroom as possible,” Cramer said. “They’d avoid interacting with others. When speaking, they’d stumble, get a red face, hands shaking.”

Students with the disorder fear or avoid everyday social situations such as eating in the cafeteria, working in front of others, making new friends, participating and using public restrooms. School can switch from a place of education to a place they dread.

“You’re probably going to try to find ways to keep from going to school,” Cramer said. “That could lead to problematic behavior, lying, cutting school, acting up, not paying attention in class by trying to look distracted so that you’re not going to have attention drawn onto you.”

Baumgarner feels like an outcast at school, confined by walls she doesn’t mean to build. She trudges up the steps with her head cast downward, eyes glued to the shoes of her peers.

“I look down because I feel so small,” Baumgarner said.

Students with social anxiety are often written off as shy or arrogant. In reality, it is the fear of judgement and humiliation that keeps them quiet.

“What’s on the inside is not the same as what’s on the outside,” Baumgarner said. “It’s like someone looking at someone and not seeing them drown.”

The excessive self-consciousness caused by the anxiety prevents people from relaxing. This often causes them to appear unapproachable.

In someone with social anxiety, the body’s fight or flight response activates and causes the person to tense up. The sympathetic nervous system response prepares the body to fight or flee in order to defend itself. In most people, it’s activated only when danger is present. With the disorder, it’s activated during social situations where there is no danger.

Baumgarner felt trapped inside herself but was unable to reach out. She originally went to counseling for depression.

“That little light at the end of the tunnel just got farther and farther,” Baumgarner said.

It is often social anxiety that leads to depression and even alcohol abuse. According to the Anxiety and Depression Association of America, about 20 percent of people with Social Anxiety Disorder also suffer from alcohol abuse.

Many people with social anxiety believe they are alone in their disorder and go undiagnosed or misdiagnosed with depression or personality disorders. These students do not need to feel alone.

Cramer says that the first step to making those with social anxiety feel comfortable at school is for their peers and teachers to treat them with empathy.
“Social anxiety is not only feeling alone,” Baumgarner said. “It’s also having those skeletons in your closet, always rattling to get out but not being able to open the door.”