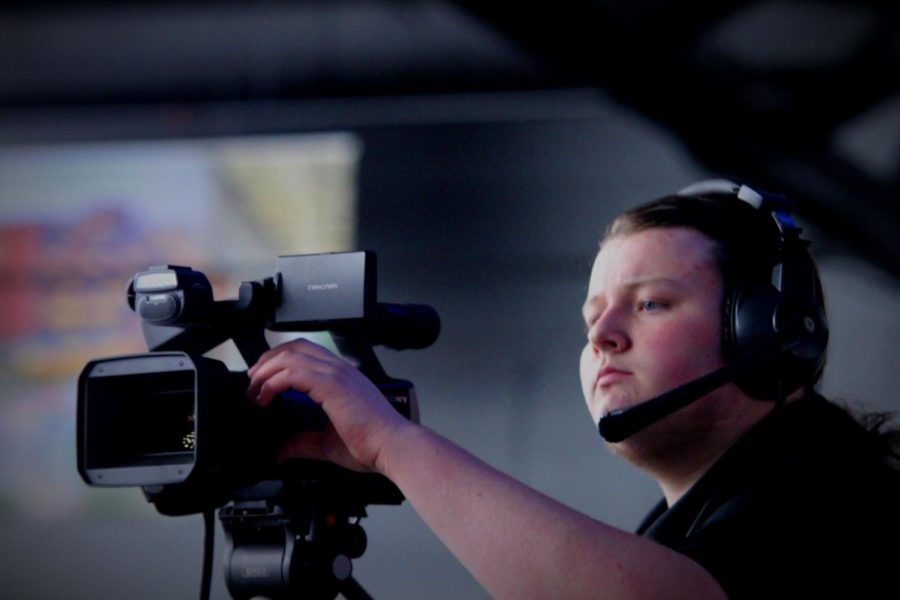 Senior Oscar Sipe adjusts the camera as he films the announcements for the Lumberjacks hockey game. “Kids our age, their first job is like going to McDonald’s or Wendy’s, my first job is doing drum gigs and filming hockey teams,” Sipe said. “Life, it’ll do what it will and it’ll set me on the path but so far this seems to be the path that I am enjoying and getting paid for, so it seems like a good option.”

It’s 4:00 p.m. on a recent Friday night and Sipe isn’t out with his friends or unwinding at home like most high schoolers. No, you can find him at the LC Walker Arena chatting with his coworkers cheerfully as he sets up his equipment.

The stadium is empty, the Lumberjacks hockey game doesn’t start until 7, but Sipe is already preparing. Below the fluorescent lights and the winding wires, you can find the film crew organizing the tech and working out the kinks before filming.

This is just one of Sipe’s gigs involving video production. He also films many of the high school concerts, the Arena football team, a band called “Five Strand Fusion” and the girls volleyball games. He’s even had the experience of filming a cage fighting match.

“Kids our age, their first job is like going to McDonald’s or Wendy’s, my first job is doing drum gigs and filming hockey teams,” Sipe said. “Life, it’ll do what it will and it’ll set me on the path but so far this seems to be the path that I am enjoying and getting paid for, so it seems like a good option.”

He got involved through Grand Haven Productions, a film club at the high school. Dennis Threadgill helped Sipe make these connections with different community organizations.

“He’s just a great kid, very coachable and understands it,” Threadgill said. “Very creative and easy to get along with.”

After setting up his equipment on the film stage, Sipe focuses as people begin to fill in the seats. He makes note of audience members who might be exciting to feature on the big screen. That’s his job operating Camera 3, to cover the announcements and then pan to the crowd for reaction shots during big plays.

A choral group steps onto the stage and Sipe organizes them in front of the camera, his friendly, confident voice resonating like a familiar tune.

“Alright guys, it’s going to be a great performance,” Sipe said, easing them into place.

He snaps his fingers and taps his foot as he glances around the arena, simultaneously listening to the rest of the film crew in his headset, perhaps holding a conversation with a staff member nearby. He’s done this numerous times before, so multitasking comes easy to him.

“His personality, it helps him a lot because he can get along with anybody,” Threadgill said. “He’s outgoing, he’s very talkative and then he’s not afraid or shy to approach a project and that really helps him out.”

As someone who wants to be involved in film in the future, this quality is essential.. Through working these gigs, he discovered he wants to pursue his passion for video production.

“It’s fulfilling,” Sipe said. “I enjoy it. I really do love editing the videos and I like seeing people’s expressions when they see it.”

If all goes according to plan, Sipe will be seeing those expressions for years to come. He hopes to pursue a career in the industry.

“I’ve never really had necessarily a goal to try and strive for,” Sipe said. “You know, you wake up, you keep going, you keep trying and eventually something will click. I seem to be at the point where something is clicking and I’m going to take that advantage.”