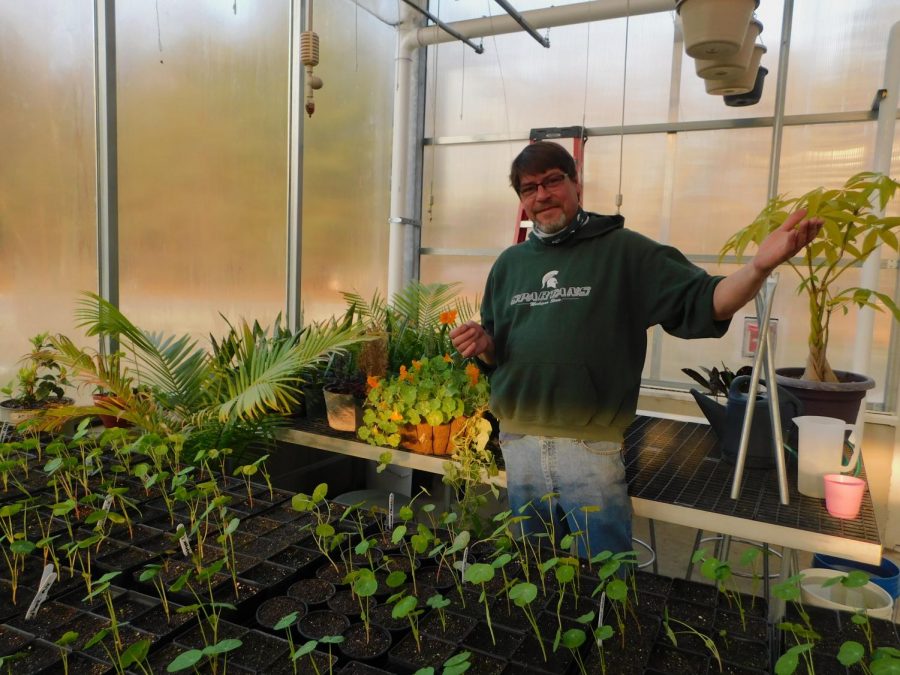 GREENHOUSE GOD: Glass shows different types of plants that students are growing in his Greenhouse Biology class whether it may be different types of vegetables or houseplants. "I get pumped up when I see somebody enjoying stuff in the greenhouse. Later they might say 'Hey, I'm gonna build a garden this year.' You [then] know that they're taking away something from the class," Glass said.

Laughter fills the air as science teacher Roger Glass struggles to spit out his famous fish story while he gags on his words.

He pauses from time to time to keep himself from vomiting like he’s done in the past in science teacher Katy Walters’ classroom.

His fish story regards a student from years past that ate part of a rotten fish out of his classroom aquarium on a dare. Glass says he’ll never forget the moment when he saw the kid slurp it down.

“It makes them see I’m human, I’m not just the teacher in charge,” Glass said. “I tell stories to get a laugh, to start the day out easy and to make it fun.”

Storytelling and getting a laugh out of his students has allowed Glass to continue teaching for the past 26 years. He says it was the best move he’s ever made.

“I look back now and I absolutely love it,” Glass said. “I wish I would have started earlier.”

Glass went to Michigan State University (MSU) and graduated with a master’s degree in Fisheries Biology. He worked at a fish hatchery for five years, but felt he needed something more stable.

“I didn’t get paid a whole lot and benefits stunk,” Glass said. “I went back to night school while I was working and I ended up absolutely loving it.”

Glass attended Aquinas College for night school. He discovered that Wildlife and Greenhouse Biology were the perfect classes for him when he student taught under someone instructing those courses. He now continues to teach them years later at Grand Haven High School.

While he teaches students about Wildlife and Greenhouse Biology, he also shows students how to be kind to others.

Walters has known of Glass since she was in high school and now teaches next door to him.

“When I moved into my room, I was more uptight,” Walters said. “He’s definitely taught me it’s not always about the material and it’s okay to be relaxed with the kids.”

She says that he’s great at being accommodating with students and connects with them really well because of his loving personality. This has made him a fixture at the school.

“A lot of students look at him as this goofy, laid back guy, but he cares so much about everyone and he has one of the biggest hearts in this building,” Walters said.

Glass cares about his students and continues to be an approachable figure for those who may need it.

“I like the variety of people that I meet,” Glass said. “They all have different stories, it’s never the same thing every day. I share their lives with them.”

Teaching classes that aren’t pressured with state standards allows Glass to have fun in his classes.

“I have a good sense of humor and I think that’s critical for any teacher,” Glass said. “If you’re not having fun during the day, then I think that the kids sense that and then it permeates through the whole class.”

With COVID-19 causing a disruption in what is taught in classes, it has also caused a disruption in human interaction with school going back and forth between in-person and online.

“I really have not enjoyed [last] March until now with remote learning,” Glass said. “I don’t want to get too technology oriented in my classroom because I think that it takes away from the interactions. It takes away little conversations throughout the day between people at your table or between teachers and students.”

Senior Noah Tenhagen has known Glass since he was a sophomore and continues to be a student of his until his final days of high school. He values the small conversations with Glass that have helped the two establish a personal relationship.

“I was in his Greenhouse Bio class in 10th grade and in his Wildlife Bio class last semester,” Tenhagen said. “I am now in an independent study with him and it was actually his idea. He’s the one who suggested the idea to me.”

Glass proposed the independent study because he wanted to help Tenhagen with his home horticulture event in Science Olympiad. Glass told him it would also be a laid back class to end his senior year with by helping out in the greenhouse.

Tenhagen has been able to learn who Glass is and how he helps students throughout the years.

“He’s relatively easygoing and he’s very understanding,” Tenhagen said. “He’s not afraid to show his emotions and connect with a student.”

While being a part of GHHS, Glass has had the opportunity to be there for his peers and students while they’ve also been there for him.

“I think we have a great staff here that really loves and supports each other,” Glass said. “It’s been a great place to work and to have my whole career here has been a real blessing.”