Sophomore Gavin Hubner practices Yo-Yo while on leave from school

Sophomore Gavin Hubner’s walls are lined with books, an Adventure Time poster and various Star Wars Lego sets among other things. His floor is clear of any clutter and his bed is made.

It’s here where he plans to spend the majority of his break away from school. 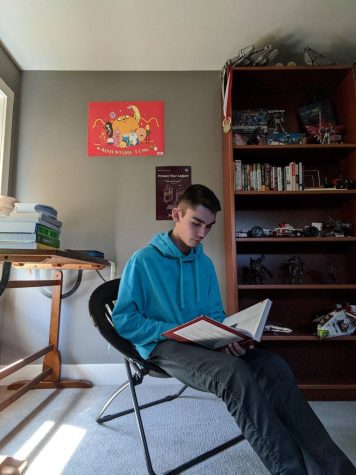 Sophomore Gavin Hubner says he likes to spend his newfound free time going on walks and reading among other things. He’s not worried about getting classwork done since he says he works better outside the classroom anyway. “I work very well by myself,” Hubner said. “I find sometimes the classroom environment confuses me, so if I have a choice to watch a video and learn from that I would pick that over sitting in a class.”

If you recognize Hubner’s name, it’s because he won the talent show last year and was sent to the Regional Talent Show Showcase to represent Grand Haven High School, and was once again selected to attend this year.

But, he will not be attending the showcase this year. Since social-life is practically shut down in Michigan, the showcase, just like many other events, was cancelled due to concerns of spreading the virus. Additionally, Yo-Yo contests around the country and world have been cancelled as well.

“All the Yo-Yo contests in the United States are pretty much cancelled at this point,” Hubner said. “Which is kinda sad because videos don’t come out and I can’t talk to people about what happened at them because no one’s going to them.”

While Hubner is saddened by these cancellations, he recognizes it’s for the best. Instead, he’s chosen to look at this situation as an opportunity to learn some new tricks.

“A big part of learning new Yo-Yo tricks is social media,” Hubner said. “With this break, I’ve had a lot more time to peruse Instagram videos and see all these cool tricks people are doing with their free time. Because then I think to myself ‘wow, I should learn how to do that’ or maybe ‘I should experiment with this idea’.”

Recently, he’s been working on some tricks that involve over-the-head elements as opposed to tricks that are performed primarily in front of the body. However, Hubner admits this has been difficult.

“I don’t do this very often, but there have been a lot of tricks with over-the-head elements, so I’m practicing some of those,” Hubner said. “They’re kinda hard for me though because I’m tall, so it’s easy for the Yo-Yo to hit the ceiling, but I’ve been able to practice those outside since the weather has been nice.”