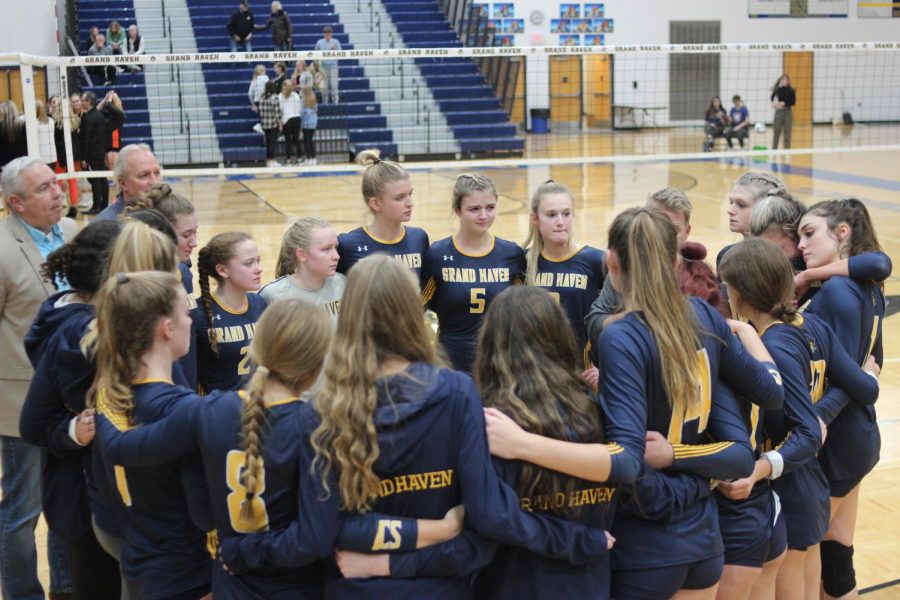 The Bucs huddle up one last time to reflect their last game and to thank their seniors for all their time and effort put in.

After a tough loss, the Buccaneers girls volleyball team’s season came to a screeching halt by the hand of the Rockford Rams. Tuesday, Nov. 9, the lady Bucs despite leaving everything on the court, ended their playoff run and overall their season losing three sets to none against Rockford.

While the Bucs struggled in the regular season going two and 12 they came into the postseason prepared and ready to push through their competition.

“There was a point at Kentwood where the players talked and realized they think that there’s a little bit of a personal responsibility that they had to take for the play on the court and that no one was really going to come in and do things for them and it was their responsibility. While [the coaches] could guide them and help them, it was the team and the seniors that had to lead that,” said Coach Smaka. “Looking at that streak on the board of having 14 straight district titles, this team really wanted to push through and keep that streak going.”

With this year’s team being fairly young, the girl’s volleyball program looks forward to being a strong senior-led team next year, which will help them achieve future success and goals, hopefully beyond their stopping point this season.