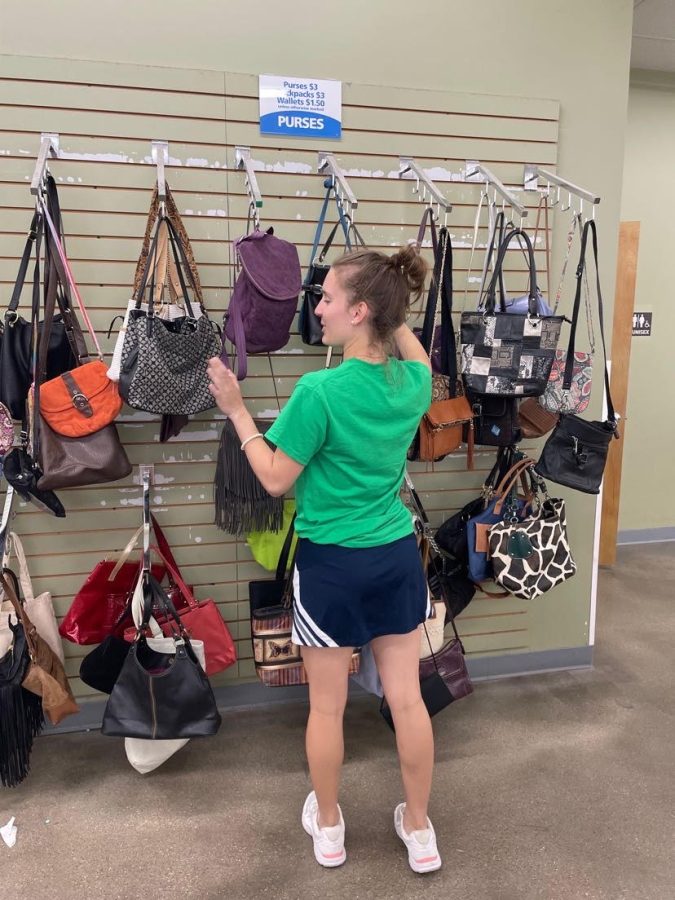 Thrifted clothing has become a lot more popular amongst teens, but you don’t usually hear of the students that thrift to make an income.

“My Dad has always liked doing things on the side, we’ve had a honey business ever since I was little,” Ritter said. “I’ve always seen the more entrepreneurial side of things, I even had a garden stand when I was little. It’s given me an outlet to earn money without a legitimate job.”

Ritter started freshman year with two friends, but as social distancing and COVID-19 restrictions became more prevalent, she had to do the business on her own.

Because Ritter holds leadership roles in clubs all over the school, such as an NHS leader and captain of the lacrosse team, finding time to fuel her passion can be difficult.

“I go to [the Grand Haven] Goodwill once a week,” Ritter said. “Goodwill usually rotates their items every week. I don’t go out of my way to go thrifting, but if I’m in the area I might as well stop in and look.”

Thrift stores require a keen eye to pick out one of a kind statement pieces. Authenticating an original designer item is challenge for many, but Ritter has the eye for picking out the good from the bad when it comes to luxury items.

“The biggest tips are the leather, because it’s very easy for companies to buy cheap leather and make it smell nice, but also the hardware and the seals on the bags can be a dead give away,” Ritter said.

She will often look at the leather from certain companies to get a feel for bad materials. Ritter does extensive research on designer items when authenticating, scanning every detail on the stitching and the seals on the bags.

“For the logo sometimes it’ll be spelled wrong,” Ritter said. “The Burberry company seal has cute little flourishes on the bottom part. It’ll be one flourish out of place, or it’ll have a dot instead of a dash. Many little nuances to the logos and the hardware are the first two places that I look at.”

Occasionally, Ritter will be able to snag a luxury brand bag with the authenticity certificate still inside. Although it’s worn down, that little piece of paper goes a long way when it comes to reselling.

Once she’s able to sell her thrift finds, it’s a rewarding experience and it makes her feel good about the work she’s done.

“I would say the proudest item that I had was a pair of tennis shoes at Goodwill that I spent almost two hours scrubbing,” Ritter said. “They were the first pair of shoes that I sold, and they went for around $30. I probably didn’t make any money if you count the work put into them, but I worked a lot harder for these shoes than I have for other things.”

Ritter utilizes Poshmark to sell her thrifted items, from clothing, to shoes and bags. She currently has 21 items sold out of the 38 listings, including a black Bottega Venetta handbag for $300 on her Poshmark, @Sammykeepitog.

“I sold a pair of size 10, Salvatore Ferragamo black heels for young people that feels very nice because they’re like $750 retail like when you first buy them, they’re in great condition,” Ritter said.

To some, this self made business seems like a long and strenuous job with little income, but for Ritter, the job is more than the money. It’s the art of finding and fixing up the top tier designer brands.

“Sure, it’s great to be able to sell something but it’s also about being able to see the little details some people might overlook when buying luxury items,” Ritter said. “This gives me a really fun appreciation of craftsmanship. Before, I really didn’t care that much about the composition of clothes or what kind of buttons there were. You’re seeing these luxury things where they’ve lasted for 10-20 years by the time you’ve had them. When they look renewed, you realize the value of the items, which is really exciting. It’s the purely aesthetic pleasing nature of it.”