Parent group is concerned about books in GHAPS libraries that they’d like to see placed behind the counter, severely limiting student access to certain titles 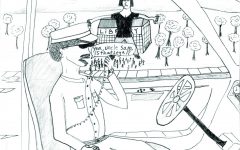 On Jan. 13 at the Grand Haven Area Public Schools Board of Education Meeting, a concerned parent, Jenifer Stuppy, brought to attention a list of books she deemed were “sexually explicit”. In particular, Stuppy took issue with One Man Guy and the supposed graphic sexual situations mentioned in it.

Stuppy recommended that the library create a system of flagging sexually explicit content (allowing parents input) and then devise a method where parents give consent. She believes sexually explicit books should be kept behind a counter unless consent is given.

In an attempt to investigate the controversy surrounding the issue, The Blade interviewed many individuals of relevance. They are: Mary Jane Evink, Executive Director of Instructional Services, Sarah MacElrath, White Pines Middle School and Lakeshore Middle School Librarian, John Siemion, GHAPS Board of Education President, Devin Schindler, a Constitutional Law Professor at Cooley Law School, and Katie, senior who is a part of the LGBTQ community.

The Blade reached out to Stuppy, who declined to comment, citing that she didn’t “feel comfortable using the same level of candidness about perverse content” because she felt The Blade reporters were still “students and minors” who would not be able to handle the nature of the story.

Why is it concerning to place books on a “restricted list” and behind the counter?

Devin Schindler: There needs to be a legitimate pedagogical concern. If they’re purely pulling them out because they don’t like gay people and the books are pro-gay, that is viewpoint-based discrimination that the Court generally doesn’t allow school boards to do.

John Siemion: Restricting access is almost like banning books totally. I do not agree with that. Restricting LGBTQ literature is against my principles.

Katie: I don’t think it’s entirely fair to put books behind the counter. That increases the division by saying these LGBTQ people are different and you need special permission to know about them.

Under what circumstances should the school district limit access to books?

Devin Schindler: It comes down to process and pedagogy. Before schools start yanking books out, they should have a process in place to make determinations. Assuming that is in place, it boils down to intent. Is the school choosing to take out all these books because they don’t like the viewpoint?

John Siemion: I’m not sure if keeping them behind a counter is a good idea or not. We’re not trying to be the literature police. I don’t want to ban books and, to me, I have no reason to put those books behind the counter. They should be out and available for the kids.

Katie: Some of the books were children’s books and kids should have the option to read them if they want. If kids are looking through the library, they’re only going to read it if they want to – nobody’s forcing them.

What kind of power or control should parents vs. the school district have in making decisions about literature?

Devin Schindler: The school boards need to have unlimited latitude to set the curriculum and determine their pedagogical goals. Parents have a liberty right to the care custody control their children. In the school setting, that is reflected by school boards. That’s why we have school boards. We let the parents make the final decisions on how their kids are educated.

Mary Jane Evink: We want to be approachable for parents, we don’t ever want them to not trust us. We appreciate community questions, feedback and input because we’re educating students. We would never attempt to parent any student because that is a sacred responsibility left to the caregivers of children. Our job is to provide balanced reading material that meets a variety of parenting styles.

Sarah McElrath: Our doors are always open, parents are always welcome to come in and look at what’s in our library. They can always log on to their child’s destiny accounts, see what their child has checked out, they can call and talk to me if they’re concerned about a book or some of the material that we have or don’t have available.

John Siemion: That’s a parent’s prerogative. I don’t fault her for that at all. To me, that is good parenting.

What can be done for students so they better understand this content and that libraries are curated well to meet the needs of students?

Sarah McElrath: One of the things I start teaching students in fifth grade is that they can never unread something. I tell them, your parents aren’t always going to be there to tell you what’s okay to read, so you have to know what bothers you.

John Siemion: The media specialist is reviewing all books to make sure they’re appropriate for all grade levels. We have 6,000 students in our district so we have to meet a broad range of literature to meet the broad needs of our students.

Katie: The problem is when they only list LGBTQ books as being sexually explicit. That portrays a message, whether or not it was the intention, that LGBTQ people are explicit material. It puts kids farther in the closet.

What is the argument for including books that contain a variety of viewpoints?

Sarah McElrath: Everybody deserves to see themselves in a book. When I was in high school and started having suicidal thoughts, it didn’t make sense, I didn’t know what was going on, and I couldn’t ask my parents about it because I thought I was going crazy. To find a book about a character going through that, to put a name to it and to know that I wasn’t going crazy was huge. I think it would be the same way for someone who is struggling with their sexual identity or their gender identity.

John Siemion: I advocate for what is best for all students. Whenever someone is being denied rights, I see something wrong and I’m going to fight for it.

Katie: Parents try to protect their kids, but really, they’re just trying to push them into the closet because they’re scared of what will happen. That has to stop. Let kids make their own decisions

Devin Schindler: The woman could try to sue, but in my opinion, she would lose. The courts are going to give a lot of deference to the decision of the school board that these books serve a legitimate pedagogical purpose.

Sarah McElrath: I want to be transparent. If a parent has a concern or a problem with a book, I want them to know that they can come talk to me.

John Simion: We want to investigate thoroughly before we open our mouths. We don’t want to put our foot in our mouths. We can be blindsided by people who come to the board with things.

Katie: I feel like we’re going through a big cultural shift right now. There’s a lot of people that are fighting for things to stay the same as when they were teenagers. People should know that it’s not a bad thing. Grand Haven High School is super accepting, which doesn’t happen a lot of times. 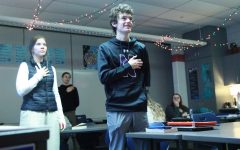 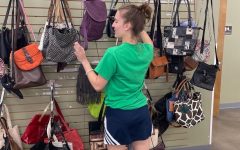 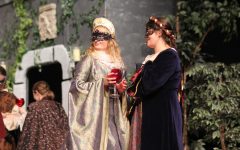 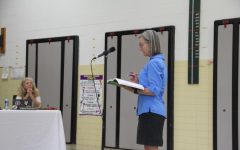 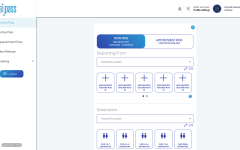 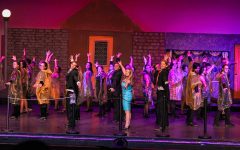 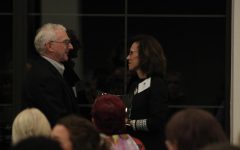 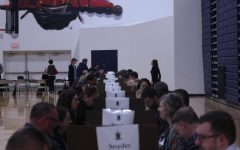