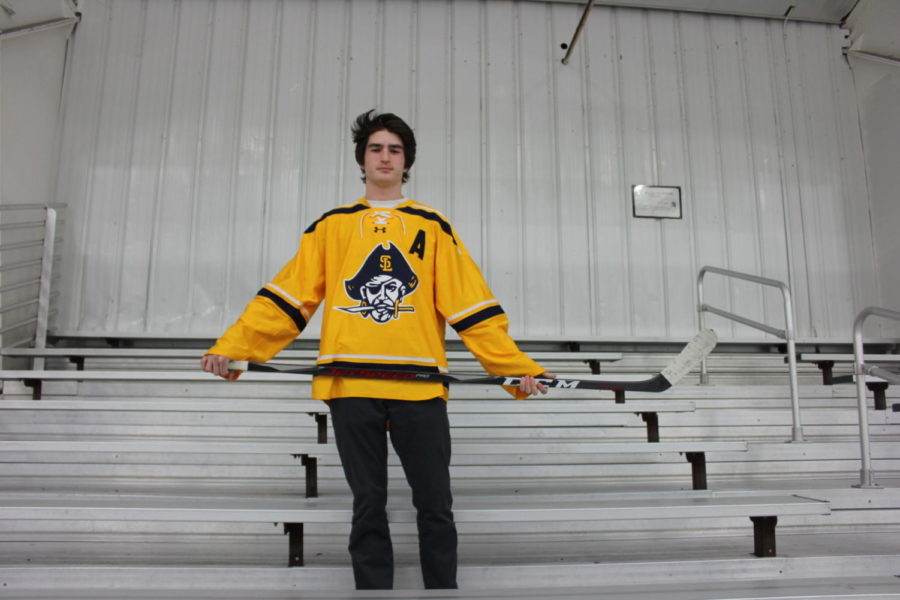 There’s only 55 seconds left on the clock, and with the conference title on the line, the puck lies at Northview’s end of the rink for a face-off. All is calm before the storm. The puck is thrown down, and it zooms back to the Grand Haven defense. A shot was ripped towards the goal, but it was blocked, and slid out to senior Kyle Eveland. And just like in practice, he shoots, and he scores.

Eveland lives for the big moments like these. He’s a rare three-sport athlete. He runs cross country in the fall, hits the hockey rink in the winter, and runs track in the spring. From the beginning of the school year to the last day, Kyle usually has some sort of practice or game on his schedule. This can make juggling academics and having a social life difficult at times.

“It can be hard at first,” Eveland said. “But I’ve gotten used to it since I have a practice or a game every day for practically the whole year”.

To be successful in a single sport, you have to pour in a lot of commitment and effort into perfecting your craft. In three different ones, you need the same level of commitment and then some. Eveland knows this, and embraces it throughout all of his three sport season.

“He’s a hard worker, he’s relentless,” hockey coach Keegan Ferris said. “He has the rare characteristic of intrinsic motivation and he hates the idea of losing, and he’ll do anything it takes within the bounds of the rules to win”.

Eveland’s desire to win has drove him to push his boundaries, and has pushed him to pick up new sports in order to help him succeed in his other ones.

“He came out for cross country just to stay in shape,” cross country coach John Tarr said. “He was just a young, skinny guy and had no idea how good he could be”.

A couple years later, Kyle was the runner who scored the one point they needed to win the conference meet in cross country. However, he still wasn’t satisfied with his personal times in cross country, so he made a big decision. He decided to switch sport from lacrosse to track in order to stay in shape for cross country.

“I wanted to do as good as I possibly could in cross country for my senior year,” Eveland said. “Playing lacrosse, I felt like I was behind because I wasn’t in track and putting in miles with the rest of the team so I felt like making the switch was the right thing”.

Even though the switch was the right thing to do to put his best foot forward in cross country, it still wasn’t easy to leave teammates and fun times behind in lacrosse. But with how demanding sports are nowadays, even in their offseasons, Kyle knew it was what he had to do to stay ahead of the pack.

“Sports are becoming not just season sports but year-round sports,” Eveland said. “There’s practices all through summer and through the offseason that it’s hard enough to play just one sport”.

“Being a three sport athlete is no joke with the expectations that are there for all three sports,” Ferris said. “But he does it all with a smile on his face. He loves that process, but at the same he does his job in the classroom and has that balance in his life and can also still be a kid and hang out with his friends. It’s hard to do, but he loves it, that’s the big difference”.